What to expect from an overnight sleep study 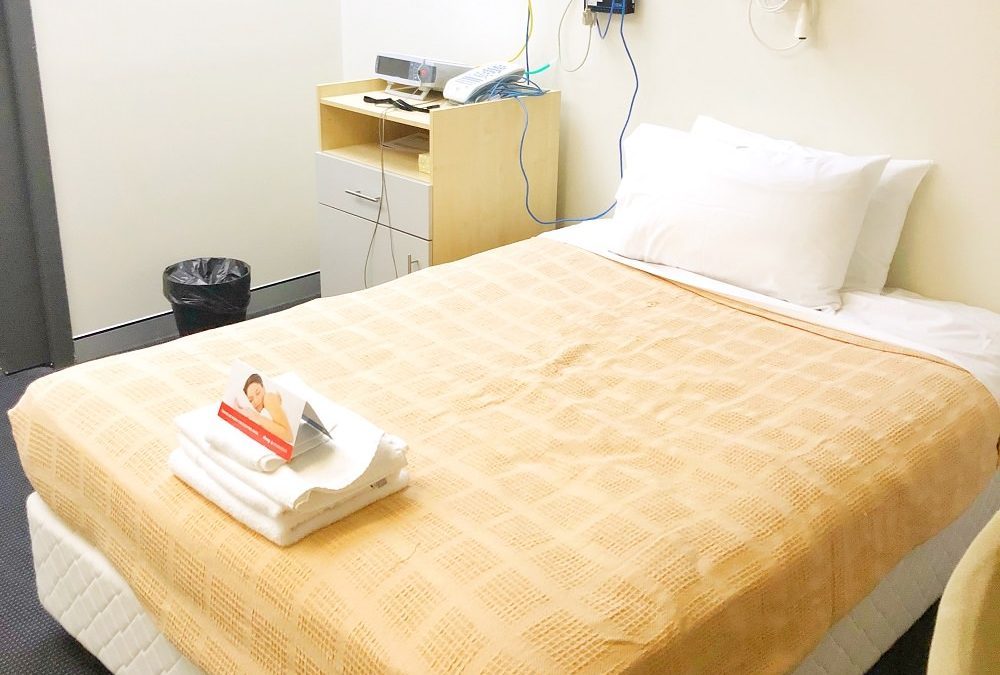 Sleep studies can be done in a variety of settings including hospitals, specialised sleep clinics and in your own home.  A sleep study involves a series of medical tests and monitoring to help diagnose sleep disorders, such as Sleep Apnea.  This is one woman’s recount of her overnight sleep study at The Woolcock Institute in Sydney, Australia.

The story below is one person’s experience and her opinions and recommendations are not a substitute for medical advice.

Recently, I had an overnight sleep study for possible Obstructive Sleep Apnea.  I had no idea what to expect or what it would involve.  So, here is a rundown of my sleep study experience.

Before the sleep study

After seeing a sleep specialist in Sydney, I was not surprised to be sent for a sleep study, but I was anxious.  I didn’t think I would be able to sleep in this strange ‘lab rat’ situation.  I had spoken to other people who had done a sleep study but most had had theirs overseas or a long time ago.  Luckily for me, the wait was a short one and my sleep study was booked for two weeks after my visit to the specialist.

The Sleep Clinic sent me an email before the study which answered a lot of my questions.  I was instructed to eat dinner before I went but I was allowed to take my own snacks and drinks into the sleep study.  I was also told to arrive with clean hair and unpolished nails.  It turns out this helps with the recording equipment.

What to take to an overnight sleep study:

Quick side note:  Electronic devices are not allowed to be on once the sleep study actually starts.  If you need to be contactable in case of emergency, give your family the phone number of the clinic.

Arriving at the sleep clinic

I arrived about 7:10pm as instructed.  By then I was giving myself a pep talk to fight off the nerves.  I was greeted at reception and then had to wait for the sleep technician.  I had to sign a waiver stating that I understood that I would be audio and video recorded in my sleep (something I never thought I would do.)

The sleep technician showed me to my room.  It was bare like a hospital room but softer and dimly lit, more like a hotel room.  There was a neat double bed in the centre and a small en-suite with toilet and shower off to the side.  It started to feel a bit like a holiday…  Until the sleep technician started to ask me about my sleeping habits, took my blood pressure, weighed and measured me.  He left me a questionnaire to fill out, told me to change into pyjamas and then I was left alone for an hour or so.  I did some work on my laptop and called my family. 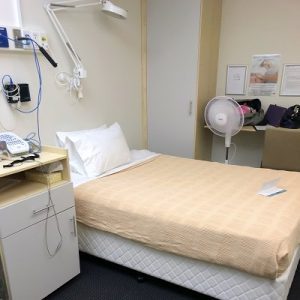 All the sleep study wires!

When the sleep technician returned he brought all the equipment with him – wires and sticky things and machines and more wires.   I sat on a chair, while he slowly and carefully stuck sticky pads on my legs, face, neck and chest.  These were then attached to thin wires that connected me to a small machine.  The sensors and wires were also glued into my (clean) hair.  It all felt a bit strange but it wasn’t painful.  He did draw on my face and in my hair to mark the right spots to put the sensors though.  So, if you don’t plan to shower the next morning then at least take some wet wipes.

The sleep technician attached a small gentle clamp to one index finger and put two fat elasticised bands around me.  One around my chest and one around my stomach.  Then he put two different nasal prong devices up my nose.  Personally, I detest the nasal prongs, they irritate and itch my nose.  All up the process was almost an hour, and then I was all hooked up and ready to be studied.  The technician went to his viewing room to check all the monitors attached to me were working.  He could speak to me through a speaker in the room and asked to me to do things like move my legs or shut my eyes.  Honestly, the Big Brother kind of scenario was a bit confronting. 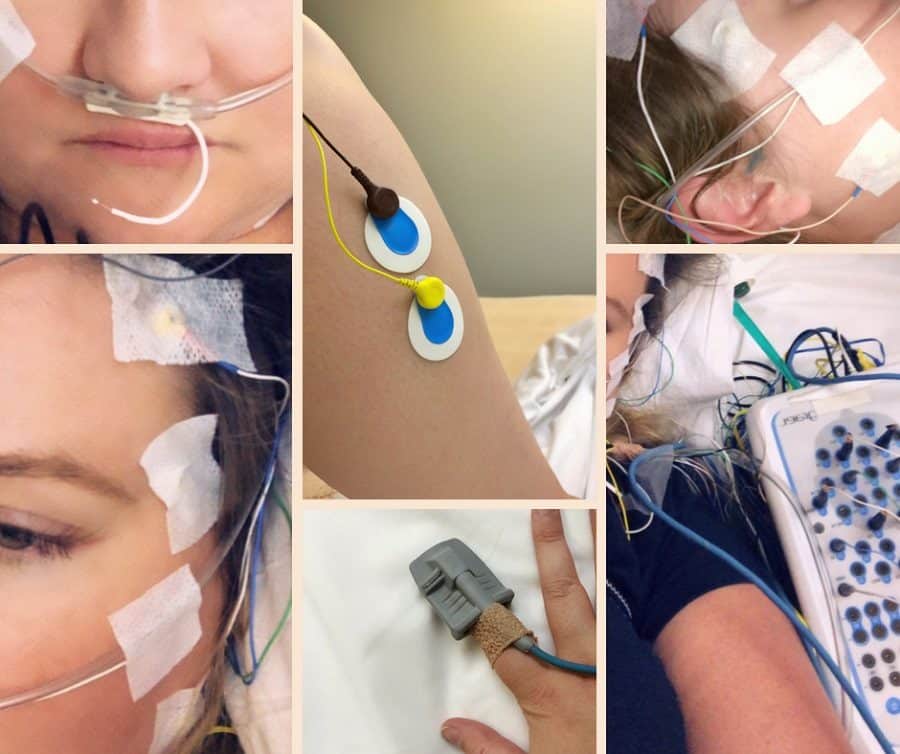 I lay in bed and watched a movie for about half an hour with all the recording equipment attached.  The clinic requires you to start trying to sleep by 11pm so they have an adequate amount of time to monitor you.  The sleep technician showed me how to unhook the machine so I could use the bathroom.  Luckily, I didn’t need to use the toilet again during the night because it was a bit of a hassle with all the wires.  He then turned off my room lights from his control tower (that’s where I imagined he was).

Trying to sleep during a sleep study

Lying there in silence, knowing I was being watched was an odd experience.  But I was tired, so the strange quiet was kind of nice.  I did drift off to sleep but I was woken numerous times during the night by the gadgets wrapped around me.  The nasal prongs annoyed me the most.  I kept waking up with my hand to my face trying to sleepily pull them out.  Mobile phones have to be turned off during the study so I had nothing to tell the time.  I drifted in and out of sleep.  I found sleeping on my back the easiest but it was also possible to sleep on my side.  The machine, to which the wires were connected, sat on the bed next to me and emitted a tiny green light.  The light didn’t really bother me but it did add to the alienness of the situation.

The morning after the sleep study

After what seemed like ages but also no time at all, the sleep technician came bursting through the door, saying it was 6am.  He turned on the lights and I noticed they were much brighter than they had been the night before.  Unhooking me from all the gadgets was much quicker than putting them on.  The sleep technician brought me a breakfast box and a short questionnaire to fill out.  I felt a bit dazed and confused for a while, probably because I had slept so lightly and had been woken up in a strange manner.

I made the rookie mistake of thinking I wouldn’t need a shower until I got home, and didn’t take shampoo or soap.  However, I wish I had taken shampoo and conditioner.  My hair was wild and matted with sticky goo.  My face also had sticky stuff and blue texta all over it.

Feeling like the swamp thing, I made my way home and was home by 7:30am.  I was tired that day and glad to sleep in my own bed the following night.  I have to wait a month for the data to be analysed and then I will go back and get my results.

Please note:  This article is not to be used as medical advice.  Always speak to a medical professional if you have any concerns about your sleep. This post may contain affiliate links.

What is snoring doing to your brain?
Is lack of sleep affecting your happiness?
Natural sleep tips to make you love bedtime!
Surprising facts about the importance of sleep