Sleep Apnea or Sleep Apnoea! Which spelling is correct? 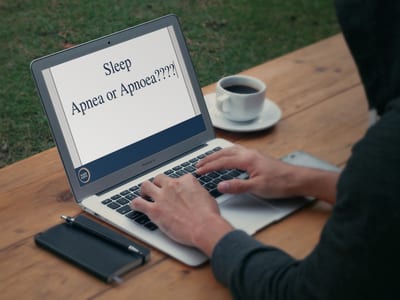 Ever seen the two spelling variations of sleep apnea (or apnoea) and wondered why they are different and which one you should use?  You are not the only one!  We went on a fact-finding mission to discover which one is correct in Australian English.

What is sleep apnea (or apnoea)?

Sleep apnea is a serious sleep disorder in which breathing is disrupted during sleep.  Psychology Today explains that this can happen because the airway is obstructed or the brain doesn’t send the appropriate signals to the breathing muscles.  The most common type of sleep apnea is referred to as OSA (obstructive sleep apnea) and occurs when air cannot flow into or out of the person’s nose or mouth due to a blockage, or partial blockage in the throat.  Breathing will restart on its own and often the person is not even aware of the pause in breathing.  However, the process does take a physical toll on the sleep health and the general health of the sufferer.  Sleep apnea can cause extreme fatigue and has been associated with serious medical conditions such as heart attack, high blood pressure, and stroke.  Sleep apnea is often associated with regular snoring.  If you suspect you may be affected by sleep apnea visit your GP or a sleep clinic without delay.

Where does the word ‘apnea’ (apnoea) come from?

The word apnea is derived from the Greek word apnoia which means ‘absence of respiration’, from apnos ‘without breathing’ or ‘without wind’.  When apnos is dissected the a means ‘not’ and the rest of the word is taken from the Greek pnein meaning ‘to breathe’.  This is the same root as the word pneumonia, a severe lung infection.

Apnea and apnoea mean exactly the same thing and are pronounced the same.  So, which spelling is correct, apnea or apnoea?  The answer is both.  ‘Sleep apnoea’ is the accepted spelling in the United Kingdom, and some of Europe.  Whereas, ‘sleep apnea’ is the correct spelling in the United States of America.  In Australia both versions are accepted as correct, although apnea is the most common.  The Macquarie Dictionary asserts ‘sleep apnoea’ as the entry title and the entry concludes with the phrase ‘also, sleep apnea.’  Both the Australasian Sleep Association and the Sleep Health Foundation use both spelling variations throughout their websites.  Despite this, most people and businesses in Australia tend to drop the ‘o’ and opt for the shorter version.  After all, shortening words is the Aussie way.

In conclusion, both spelling variations; apnoea and apnea, are considered acceptable to use in Australian English.  However, Sleep Apnea is now the most widely used version of spelling the word in Australia.  Therefore, we would recommend using ‘apnea’ not ‘apnoea’ if you are in Australia.

Please let us know how you spell it in the comments section below.

Please note:  This article is not to be used as medical advice.  If you are considering a sleep treatment please consult your doctor or medical professional.  This post may contain affiliate links.